It was exuberant delinquency to scribble on walls that evolved into present day wall art which we don’t call graffiti anymore because those with an artistic mind see it otherwise.

Graffiti which were generally limited to unsuspecting walls, trees, furniture, roads and other public owned places became the target of delinquents who thought it fit to express themselves even though somewhat loudly that it was art that they were trying to project to those who would care to see it that way. For the Evolution Of Graffiti, please click the link!

Where it all began

The word itself was associated with the ancient art of drawing or scribbling messages, patterns, drawings, scratches and writings on the wall of caves and other dwellings where it was expressed with a form that sometimes bordered on vulgar intentions but carried a form of art unnoticeable at the time but appreciated today.

The Greeks and the Egyptians took it in their stride and did nothing about it as long as it was limited to places out of the sight of the general public. 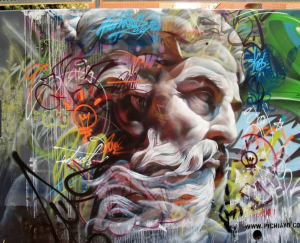 The art form that we call graffiti today, first saw the light of day in the alleys of the Big Apple in the State of New York, the city that never sleeps.

The alley ways of New York City became the target of delinquent individuals who expressed what they though fit and presumed was a form of art on the walls of this very vibrant city in the United States.

It began with teenage delinquents thinking it was a recognizable feat to scribble their names on the back of bus and train seats or in the subways.

It later took a new twist in Philadelphia where two distinctive names signing graffiti became very popular and took the names “Top Cat” and “Combread” which were both distinctive in style. To know how to collect art on a budget, please pay a visit here!

Then along came the spray cans which became the new paint brush for these delinquent artists and they became drawing on anything that was vacant within minutes before the long arm of the law could get to them.

Two types of graffiti “artists” took to the streets one that had no artistic flavor and the other with some inherent artistic flare and the two groups competed with each other outdoing the other with a selection of loud colors that gave lookers and others a sense of disgust and belonging as they were identified by some as art at its best.

Those who detest this form of art have no choice but to live with it as it has taken a new direction with many appreciating it as an art form that has some substance to art as a whole though some may call it vulgar graffiti.

There is no sense today to look down at this form of art as delinquency at its peak but to accept the fact that graffiti is here to stay and would be covering every inch of space available in the larger cities whether we like it or not.